A downloadable game for Windows

Overview and what to expect.

This is a simple shooting game in Virtual Reality (VR).  Imagine the 1980s arcade game Gauntlet in VR and then make every aspect simpler and you have VR Maze Hunter.  The artwork is simple but has a nice color scheme.   The enemies are simplyl capsule shapes with sunglasses on.  The guns consist of three cubes.  The bullets are little spheres.  But its simplicity is its charm and it is fun to play and was fun to make.    It probably takes 15-20 minutes to beat all ten levels.  On each level you search for a key while being attacked by enemies. You shoot them with the guns you pick up on the table at the beginning of the game.

This game is Windows only and it requires a VR headset and SteamVR.  It has only been tested with a Windows Mixed Reality headset on Windows 10 but was designed to work with Oculus Rift (with Touch and 360 tracking) and HTC Vive as well.

At the beginning of the game when you look around you will see a table with four guns on it (graphically they are crude representations of guns but nevertheless ...).  Pick them up by holding your controller to the gun and clicking the grip button.  You can let go of the grip button once you've picked up the gun.

Teleport by clicking and holding the touchpad, aiming to the location you want to go, and releasing (clicking and aiming the stick should teleport on oculus).  You can use the natural capabilities of Virtual Reality to peek around corners, shoot around corners, and even shoot over walls.

Throughout each level there are doors leading into other rooms in the mazes.  Shoot the doors to open them.  They are blue and once you have opened them they will stay open even if you meet your unfortunate end which brings me to ...

Beginning on Level 2 you will start to encounter enemies.  They will either patrol an area looking for you and chase you if they see you or they will stand stationary and watch for you to venture into their line of sight at which point they will chase you.  As soon as they see you they will begin to hunt you.  As soon as you see them it would be best to shoot them with the guns you picked up on the table at the beginning of the game.

If you get hit by one of the enemies you will have to start over (not the whole game, just that level).  Beware because they can easily sneak up behind you and every time you get hit you will be instantly teleported back to the start of the level.  Fortunately if you have dispatched some enemies or opened some doors you won't have to do that again.  The enemies stay dead and the doors stay open. 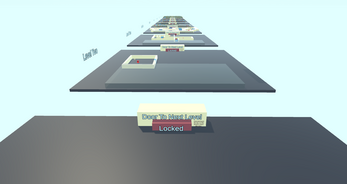